Home / Blog / Getting started with Angular 4 without a seed
Blog

Getting started with Angular 4 without a seed

Getting started with Angular 4 without a seed 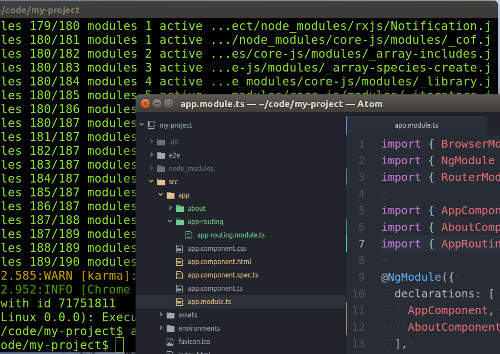 There is a lot more to Angular development than Javascript and Typescript. The tooling required to fully leverage the framework is quite extensive. You need to consider debugging, building and distributing, and testing. Each of those take additional tools and libraries, each with their own setup and configuration. Back when Angular 2 was still in Beta, and shortly after it was released, you'd use a seed project where all those issues were sorted out. We owe many thanks to Minko Gechev and the contributors to his seed project.

In this article we will achieve a very similar result by just using the Angular command line client (cli). We will create a new project and add the setup for some basic navigation, at which point you'll have everything need to add your own special sauce.

We'll assume that you have a recent version of node and npm already installed. We'll need to install the angular cli. If you don't already have it, install it now from npm with the following command:

Open a command window and type ng. You should see the usage text for the command line tool and running ng --version should print something similar to what I get on my development machine:

You now have a basic project in the 'my-project' folder, that you can start adding content to. You'll need to run npm install in the 'my-project' folder to install all the dependencies from the package.json file that has been created for you. Once everything has been successfully installed, running ng test will launch Karma and a browser to execute the tests. Karma is used together with Jasmine for testing. Some tests are pre-generated and you can see that everything passes in the browser window that opened. You can leave that window open and start making changes to the app. Every time you save a change the tests will be re-executed, so you can see that all is good. Use ctrl-c in the command terminal to stop testing.

ng serve starts the application. By default the app is running on localhost on port 4200. Browse to http://localhost:4200 to have a look. Aside from some very useful links to the resources you need to keep learning, there is not a lot there. For you to be able to add your application details you'll need at least routing and navigation in the app.

'ng generate' is fantastic at scaffolding code into the projects. You can add modules and components, as well as other features, to the project with ease. All the generated code will follow the same conventions, tests are added (the .spec.ts files) and setup for you to add your content to. We will add a component so we can demonstrate the navigation in action. You can group components in a single feature area into a module. However, for the purposes of this post, we'll just add the component to the app module. We'll generate an 'about component' where you can display some text about the app and it's authors. If your application is still running, use ctrl-c in the terminal to stop it. and run the following.

It should print out a few lines explaining what it's doing, and any files that are created or modified.

You will see a new 'about' folder has been added to the app folder. It contains the component files, including the tests. The default html is just a little 'It Works' paragraph, which is exactly what we're after at this stage.

Routing and Navigation in Angular is fully featured for any requirement you may have. For the purposes is this article we will just add basic routing and navigation to get you started. We will use 'ng g' (short hand for 'ng generate') again to stub out our routing module. Note that a dedicated routing module is not mandatory, but we're here to start building a serious app, and we're better off handling all the routing in a seperate module.

Once again, it tells you what's it's up to;

Next we need to add the navigation and router outlet to the App's html template. Open the 'app.component.html' and add this code to the bottom:

If you still have 'ng serve' running, then you can see the navigation in action on http://localhost:4200. Scroll down to the bottom of the page and you'll notice a new hyperlink labelled 'About' on the left side. Click it and you'll see the page update adding "about works!" below it, rendered within the new router-outlet tag. It's not much to look at and doesn't have any style yet, but it's a starting point to build out your app's functionality. If you were paying close attention, you may have noticed that the page didn't reload when we clicked the About link, it simply loaded the new component and updated the page as needed.

If you kill off the ng serve command with 'ctrl-c' and run ng test again, you'll notice that they fail horribly.

That's because we added some routing dependencies that are not reflected in the app's tests yet. Let's fix that. Open up 'app.component.spec.ts' and add the following imports to the top of the file:

Then update the TestBed configuration in the 'beforeEach' to look like this:

After declaring your AboutComponent and adding both imports for both AppRoutingModule and RouterTestingModule, your tests should pass.

The Angular team and the open source community are working together to provide us with tools, features and functionality to support the framework. By leveraging everything that the Angular CLI offers, it's very easy to start a new Angular project that's well structured, ready for testing and easy to work with. It's no longer necessary to cobble something together by yourself, hoping that you didn't overlook something, or to rely on a complex seed project that's trying to be everything to everybody. Using the Angular CLI gives you a familiar structure, built-in testing and gets your project ready for building, debugging, testing and deploying sooner than hacking it together on your own.